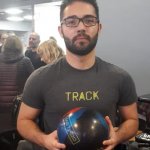 A huge congratulations to Johnny Avvenente for bowling his first sanctioned 300 game on Tuesday night in Precision Bowling League in Splitsville Woodbridge. This is Johnnys 5th perfect game!! We are so happy for you. Not only are you an amazing bowler but you are one hell of a nice guy. Johnny was throwing his […]

The 2019 Weber Cup will make its debut on American soil at Mandalay Bay Resort in Las Vegas, June 18-21, Matchroom Multi Sport has announced. The 20th annual competition will involve teams of European and American PBA stars, competing in a Ryder Cup-style series of individual and team matches. The tournament will be played over […]

For the last decade, Chris Barnes of Double Oak, Texas, and Tommy Jones of Simpsonville, South Carolina, have been staples of the Team USA program and regulars on the medal stand at events across the globe. The two recently helped the United States to a tournament-best eight-medal performance at the 2018 World Bowling Men’s Championships […]